The 6th annual benefit DIY festival Pravěkfest will be held from the 6th to the 8th of October 2017! Every year we get a little bit bigger, all thanks to your interest – this time 3 days and 2 stages! On the band stage, you will experience many different genres each day, but all connected with the element of extreme music, and all sharing DIY/anti-mainstream principles. Friday is dedicated to doom and black metal, Saturday belongs to hardcore, punk, crust, grind and even gore, and on Sunday we finally move to an experintmental and alternative sound. The Freetekno stage will be located parallel to the band one, and will be managed by our friends Olgoj Chorchoj Sound System and The Prostory Revival! You can enjoy all of this in the huge and atmospheric Eternia/Underdogs club, led by great people that love the music you do too! 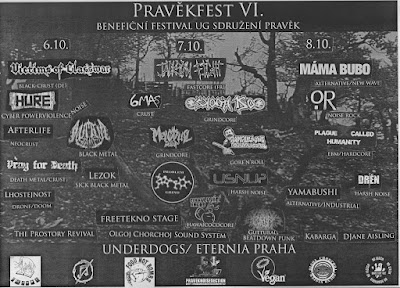 After covering our costs, donations will be given to Food Not Bombs organization – the admission is voluntary, but we recommend to give 6E per day, after giving 11 E you will be given an armlet for all 3 days!
Pravěk is a project of an independent DIY literary movement that helps mostly young authors with releasing their art without waiting in the line of “unsolicited” writers and without groveling in the front of commercial publishers. DIY or die!

Victims of Classwar
On the Friday evening the horn on Lucifer's forehead will shine brightly, with black metal and punk genres together. This might not be a matter of course for everyone, but when this connection occurs, it usually means a magnificent band – like Victims of Classwar! They play a brutal black metal indeed, with slightly crust-like drums, but in the case of their attitudes, they are punks in their hearts. And if you have seen their show at Underdogs we promoted last December, you must definitely come back! https://victimsofclasswar.bandcamp.com/

Hure
Fuck yeah! This brutal sonic press wished to play in Prague for a long time, now they are finally coming! These two bass guitars maniacs wrapped into toilet paper, gaffer tape and into who knows else are rolling a noisy mass bordering with electronic powerviolence and harsh noise wall, which is cut by raw beats too fast to power-electronics and to shitty to techno dance. Simply unique, your head will pulse even a month after the festival! https://hure.bandcamp.com/

Máma Bubo
The legendary new wave band from the eighties, no need to explain more! Maybe just the fact that they also feel the need to be critical to the contemporary gentrified culture and political situation, as the younger bands do. Every concert of Máma Bubo is a real celebration of the deep, unconventional not-only-music, that is not at all bitten by ravages of time. And of course you can expect something special - improvisation is these musicians’ real strongpoint!http://bandzone.cz/mamabubo

Jackson Fight
Last year this band absolutely destroyed More Noise for Life festival and then also Azyl club in Liberec, so when we were searching for the appropriate guest from abroad, this was an obvious choice! Raw guitar overruns, maximum pace sometimes interleaved by hardcore jumping passages, a combination of male and female vocals, simply everything that the proper fastcore should have. Moreover the lyrics are about anti-chauvinism, feminism or for example about the fact that more black tattoos won't make you a better anarchist. Teeth smashed by unicorn's hoof! https://jacksonfight.bandcamp.com/releases

OR
This band became almost legendary within Prague contemporary underground - take for example the concert against racism. We almost forgot when exactly that happened – but it feels like 20 years ago! Yet their music is still full of new ideas and surprises - for example their new record sounds more like an alternative rock compared to the older dynamic noise rock stuff. Make alternative great again! https://ornoise.wordpress.com


Škoda 120
KEYS IN AN IGNITION/CHOKE AT FULL BLAST/ UNDER THE HOOD OVER FORTY HORSE POWER/FOUR HURRIES/JUST TURN IT OVER/ ŠKODA 120!!!! / very liberal translation/ This is one of the most merciless and furious grindcore bands that have ever played on this festival, hear the songs about people killing each other by cars! Since 1996! http://bandzone.cz/skoda120

Smuteční Slavnost
These Afa vegan baph goats steered their unorthodox BM from depressions to post-metal and shoegaze influences, their music is nowadays more and more progressive, despite it still bears its dark garb and extreme volume. Expect the atmosphere and technique of the bands like Weigedood, Harakiri for the Sky, or in fact like the most of cascadian black metal scene.https://smutecnislavnost.bandcamp.com/

6MAS
Moravia is known as a birthplace of many really odd crust-as-fuck-ers, which ever came up from the soil! Clamorous drum firing, vocal fights, raw sound...you know what we mean! Since their last release Rape the Earth! much beer has flowed, but the owners of this LP are aware what an energetic bomb can be expected! After Škoda 120 you will have to set the other cheek for another kick! http://bandzone.cz/6mas

Menstrual Soup
One of the hardest and most brutal contemporary Czech bands on the extreme music scene, yet, or maybe hence, it is disregarded by many subcooltural media. Moreover, Menstrual Soup is now reinforced by the second guitarist, a bass is therefore conveyed to sludge bands. Their first release- the split with Swrab and Ejakulující Kokos- is also expected on Pravěkfest! This band is in fact a matter of family, but with only one difference - the soup is not thrust into children, but the children are thrust into the soup! http://bandzone.cz/menstrualsoup

LEZOK
Read the name of this band backwards (and put it into the google translator of course)...can you see now? And their music is even more remarkable - the roots of composition, the atmosphere and vocals are still in black metal waters, but the usual BM structure is disrupted by not only weird guitar plies. Who have never seen them yet, will be certainly surprised. Moreover they are so perfectionist that their long-awaited album is still unfinished. So the only chance for you to enjoy LEZOK is the life show! https://www.youtube.com/watch?v=xoQt4Uxjv4U

Usnu?
Grinding sore noise of the solitary man with his pseudo-guitar, whose heart hides a dark melancholy, maybe originating in some pervert desire to be a rockstar, or even a popstar. But for example the collaboration with UGFC - currently being prepared - will show you that under the title of “Usnu?” (shall I fall asleep?), even more sophisticated power-electronics set can be created. Anyway, on this festival he will give you almost Massona-like noise-rock'n'roll show enriched by power of Moravian vine cellars and Austrian highways. Shall you fall asleep, fucker?http://bandzone.cz/usnu

Afterlife
This relatively young band is unbelievably creative, their first release is more than promising! Enjoy the trip from the post-metal motives to the hardcore and neocrust influences, sometimes you will be able to feel even an epic metal wind. Especially the feelings of gradation, dynamics and sustained atmosphere make this band an excellent turned cross (over). To all of this you can add a mighty sound of Underdogs, so prepare to fall on your knees! https://afterlifepunk.bandcamp.com/releases

Plague Called Humanity
The boundaries between electronics and hardcore, moreover in the dark Gothic contours, are not much favored by the trend hunters yet, as one would maybe expect. PCH combines these influences with emphasis on irony and incorrectness, similar to the old school new wave, but also to actual cyber hardcore or even grindcore (imagine cybergrinder BBYB meeting electro death rock She Pleasures herself!). Anyway their first EP is an outstanding piece! https://pchband.bandcamp.com/releases

Bambulkyně Dobrodružstvá
Bambulkyně Dobrodružstvá is both a band of fairy tale tupa tupa dancing and also a rather brutal peepshow bordering GG Allin, when various human excrements, or even some backline parts are thrown to the audience. Maybe that's why they are usually being invited especially to the birthday parties. Beware of sickles tho! https://bambulkynedobrodrustva.bandcamp.com


Pray for Death
This band waging a war on the edges of death metal, crust and stenchcore will set the fire certainly! One of the dark horses of the festival! The new songs with new sound are currently being prepared just to be ready for this festival, for now it is a surprise, but their incorporation into Friday’s program actually means something! http://bandzone.cz/prayfordeath

Drén
The noisy magician is unearthly active both in releases and parties as well. Who knows our distro, is maybe already aware of his new record called Leichenhaus in the shape the black box with a rather strange smell. Beside his full scale noise terror on the main stage he will also prepare a special set on Jihadi John stage with yet unannounced confederate under a title “Don't talk to DJS“. http://drensoundworks.blogspot.si


Yamabushi
The origins of Yamabushi's songs can be found in Máma Bubo, Před vaším letopočtem and Yamabo bands from 80s and 90s. The contemporary face of this band is intergenerational. This gives them a certain kind of a special unpredictability (do you know that the youngest members of Yamabushi play also in Bambulkyně Dobrodružstvá?). But as Vlasta Matoušek, the band-master, anti-advertises: „The fans of this band haven't been born yet!“. Well, let’s try to conceive some :-) http://bandzone.cz/yamabushi

Ejakulující Kokos
„Hawai coco core?!?!? What the hell is that?!?!“ Or one more review from the musical cages: „Ejakulující Kokos – mentals that are trying to play gore-grind“. And the band replies: A) We are mentals B) What is gore-grind? A band that is capable to make fun even of itself and feels no need to act as correct world savior simply belongs to this festaival too. So enjoy the palm falling on you heads! http://bandzone.cz/kokos

Lhostejnost
This drone-doom band is sometimes reviewed as the „reall slow“ one. But that's correct at all, cos Lhostejnost (trans. Indifference) plays MOTIONLESS music. You don't jump to the abyss, the abyss will jump into you. But if you really survive it until the end, please, do not bother to applause!

http://lhostejnost.bandcamp.com/
Mario The Shoomer
Finally some young blood (or better said, cloth :-D) from Prague! These guys are by the way active promoters as well, they would offer the last hairs from their balls for a help to a touring band. Musically they absorb many influences and throw them up again in a rather original way! Guttural beatdown punk – something between death-slamming „farting to a bottle“ metal, hardcore breakdowns and gory pig squealing. And they play punk too, while you are sleeping.
https://www.facebook.com/mariotheshroomer

"Jihadi John" stage:
...in other words the stage that will cut your head off! It is gonna be managed by Olgoj Chorchoj Sound System crew, so the essential part of it will be based on acid freetekk DJs sets, but you can certainly expect also live sets with many features, especially the acid electro-visions by Kabarga or electronic acid poetry by The Prostory Revival. After the Dead Bodies Shaft will be filled, the night program will continue here, Jihadi John will also rumble the afternoon impatients. But even a transfer of some live-set musicians to the main stagecan’t be ruled out, we shall see:-) Finally, special guests will be introduced on Jihadi John stage, mainly DJane Aisling playing new wave, death rock, dark wave etc, but also the above mentioned Drén and his secret companion will present their live set called „Don't talk to DJs! there“
Vystavil Pravek Noise Section v 7:51 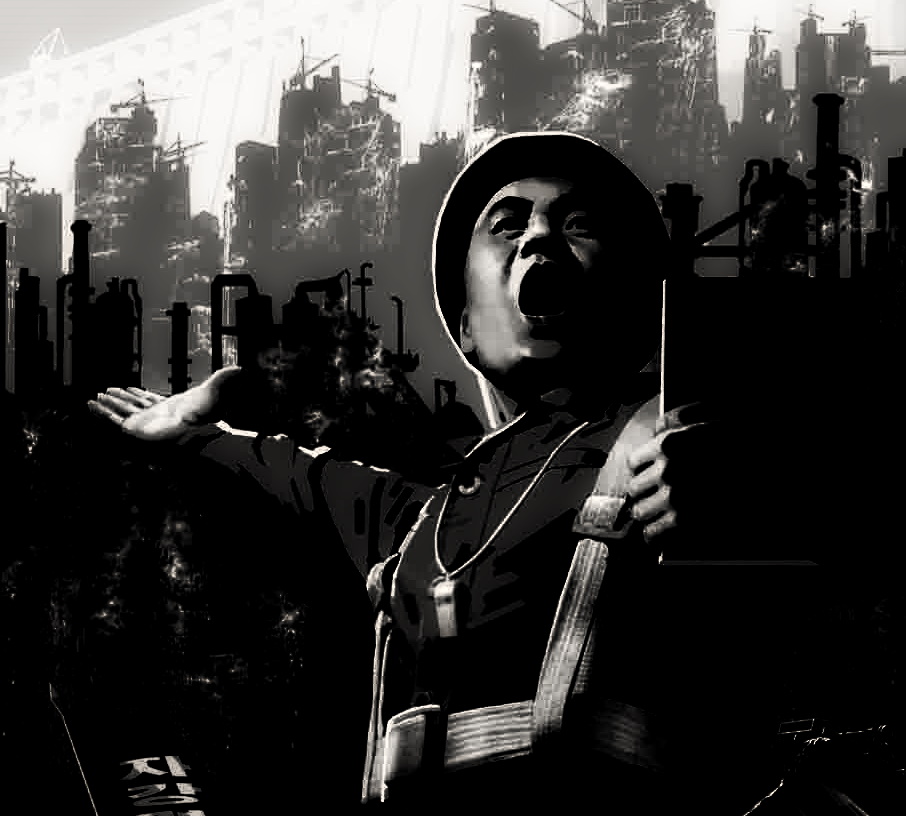 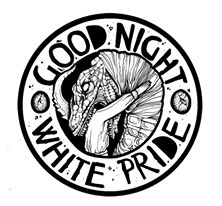 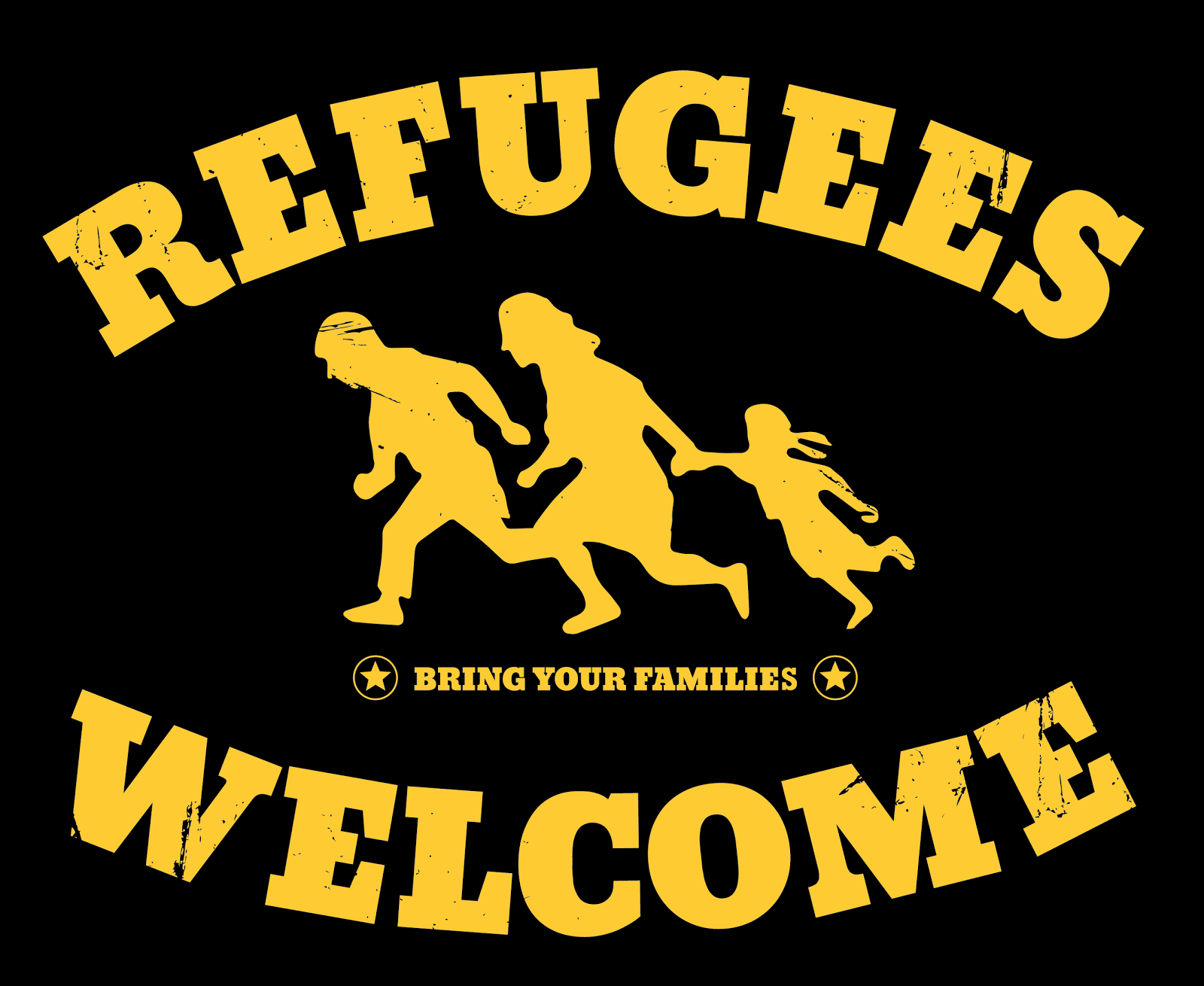